08 Aug The best courtyards in Milan

Posted at 15:09h in Itinerary by Luca Naj-Oleari 0 Comments
0 Likes

Behind its strict and reserved aspect, Milan hides little corners of beauty that distracted people won’t notice. If you are in the city, do not stop at the most traditional tours, but discover the hidden Milan behind the doors of the historical buildings.

Today we are letting you discover some of the most beautiful courtyards in Milan, in order to give you a taste of the unique and fleeing beauty of our city. 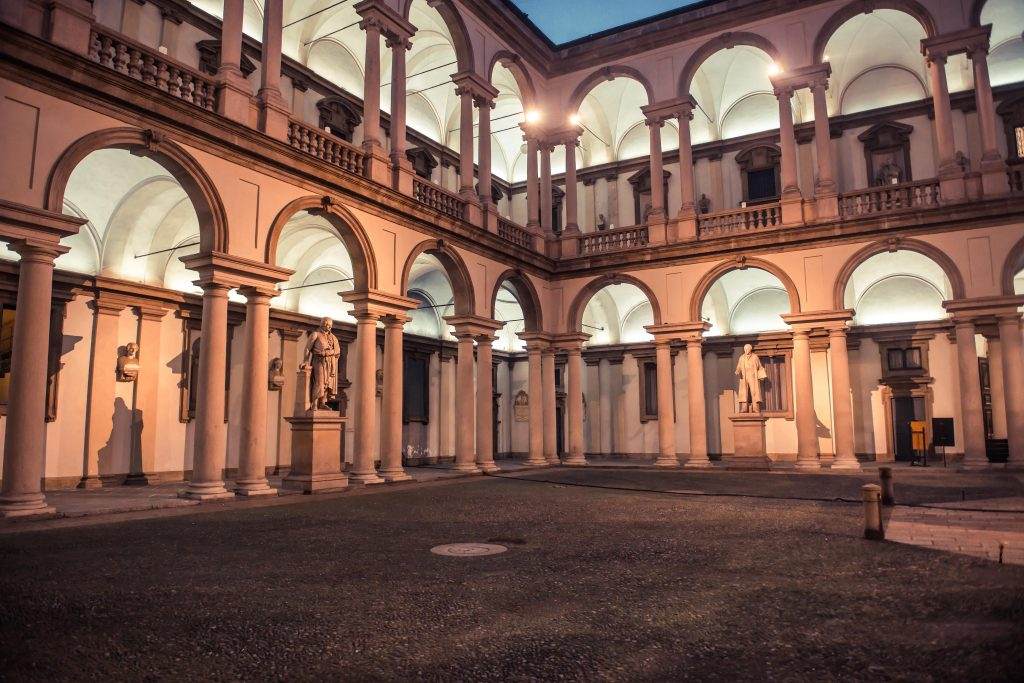 In via Cappuccio 5, a few steps from the Sant’Ambrogio Basilica, you can find a marvelous 1300s courtyard, once belonging to the female convent of Umiliate nuns.

The Convent was suppressed in 1810, and for more than one century it has been subjected to savage demolitions. In 1914 it was purchased and restored by Carla and Guido Ucelli di Nemi - the wealthy and forward-looking founders of the Museo della Scienza e della Tecnica - who transformed it in their private dwelling.

Today, the cloister within the Ucelli di Nemi House is the last trace of the Convent. Splendidly preserved, the courtyard is an oasis of peace and rare beauty: a porch frames the garden and, inside the cloister, there is a pit characterized by the traditional Renaissance shapes.

The courtyard isn’t always open to the public, but it’s possible to visit it with guided tours, like those of Città Nascosta Milano, or during “Cortili Aperti”, the annual initiative organized by the “Associazione Dimore Storiche Italiane”. 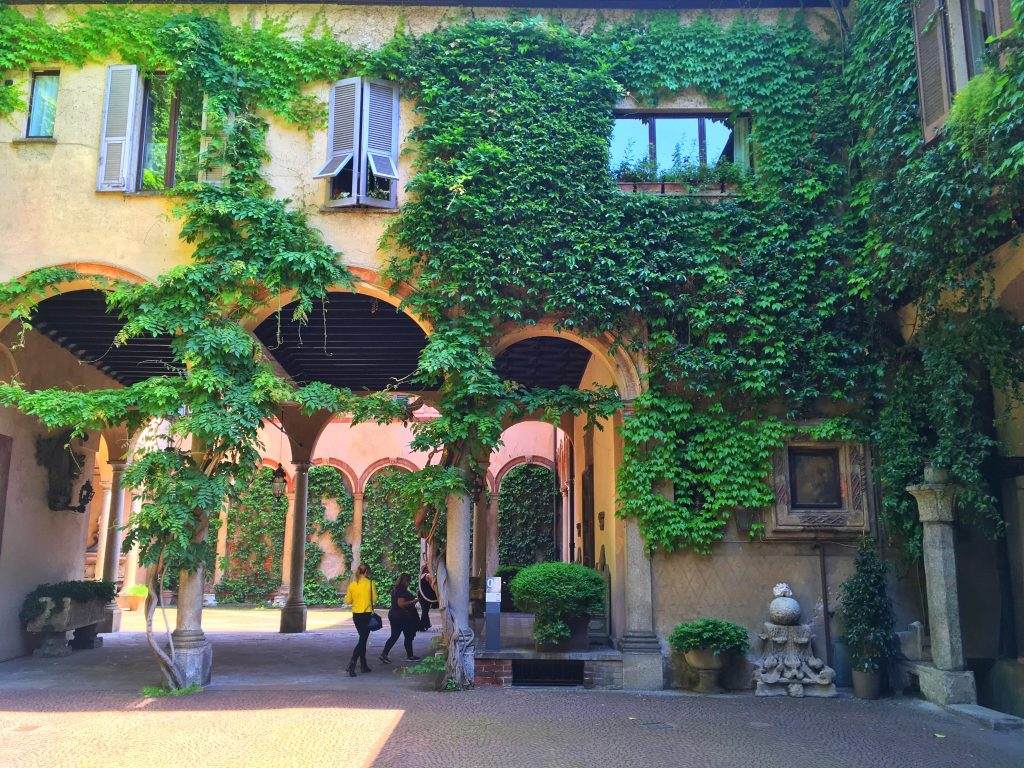 In front of the Santa Maria delle Grazie Church, in Corso Magenta, there is a hidden jewel, Casa Atellani. Here, in 1498 Ludovico il Moro, duke of Milan, gave Leonardo Da Vinci the vineyard where the greatest artist of the Renaissance spent his time after working on the Last Supper, commissioned by Ludovico himself.

On the occasion of Expo 2015 and thanks to the Fondazione Portaluppi and the current owners, the vineyard was restored to its former glory, and it’s now possible to visit it with guided tours to discover the passions and the traces left by Leonardo.

Before entering the vineyard and exploring the rooms of Casa Atellani, stop in the courtyard to admire its porches and the Renaissance frescos: you’ll understand why this courtyard is part of our list!

One of the most beautiful courtyards in Milan is placed within Palazzo Borromeo D’Adda, in via Manzoni.

The Palace, belonging to the Borromeo’s family - one of the most influential of the time - was built in the Fifteenth century and restored in neoclassical style during 1820s by the architect Gerolamo Arganini.

The courtyard of the Palace amazed the French writer Stendhal, who described it as a “magnificent court”. After entering the wrought-iron gate with the emblem of the family, you’ll have access to the ample courtyard, enclosed by a porch of Tuscan columns covered with climbing plants, and to the beautiful garden.

You can visit the Palace and the courtyard with guided tours, or on the occasion of Cortili Aperti. 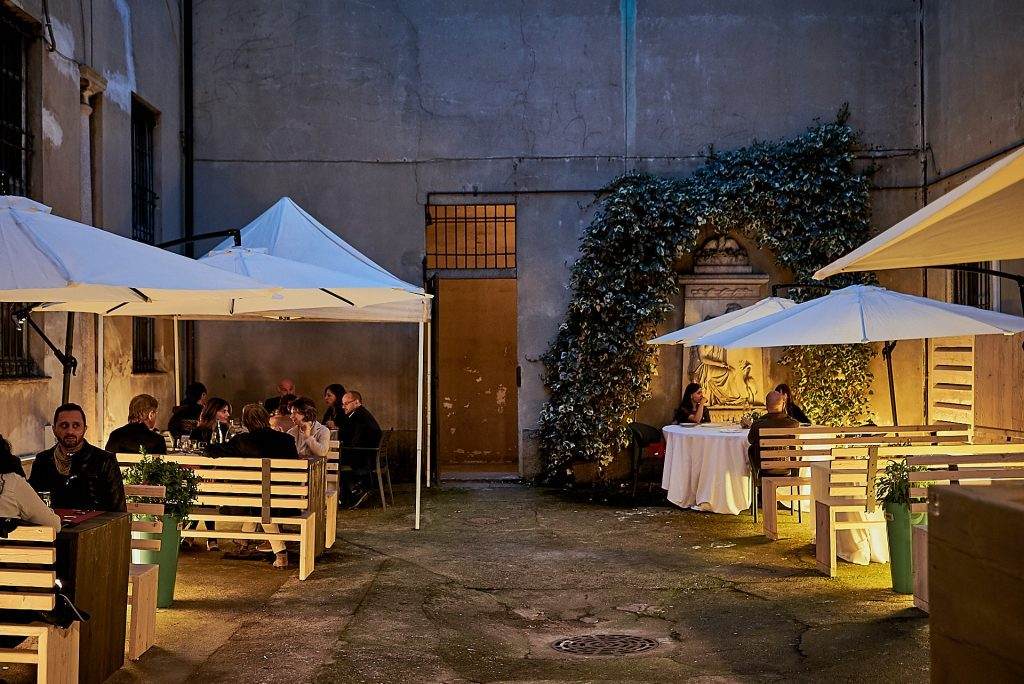 ArSe is the secret path across the historical Archive and the Crypt of Ca’ Granda, one of the most ancient hospitals in Italy, recently opened to the public.

The path is an immersion in the history of the city, starting from the immense artistic and archival heritage of the Archive, which hosts, under frescoed vaults, all the documents of the Ospedale Maggiore - from its origins in the Fifteenth Century till today - the letters signed by renowned public people like Napoleon and Leopardi and paintings by famous artists like Segantini, Hayez and Carrà.

The Speziere Garden is secret too: it’s the courtyard that links the Archive to the Crypt, a fascinating place where it’s now possible to have dinner thanks to the initiative “Dinner at the Museum”, diving into a secret and unknown Milan.

What about you? Which courtyards do you want to visit in Milan? We’re waiting for you at Hotel Cavour: we’ll be happy to suggest you the most secret itineraries of our city!

We use cookies to make sure you can have the best experience on our site. If you continue to use this site we will assume that you are happy with it.OkPrivacy policy