DISCOVER THE ART OF MILAN 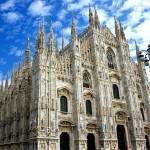 This is the main religious monument in the city and the largest building which Gothic architecture erected in Italy. Situated in Piazza del Duomo, the geometric centre of Milan, it covers 11,500 square metres, is 158 metres long and 93 metres wide; it is topped by countless spires, the tallest being 109 metres. Its construction started in 1386, during the reign of Gian Galeazzo Visconti (the architect who designed it is unknown) and continued until the 19th century. A succession of Lombard, Campionese, French and German maestri acted as director of works. 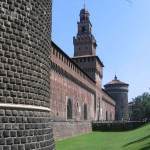 Originally founded by the Viscontis in the 14th century, it was called Castello di Porta Giovia (the Giovia Gate Castle) and was immediately outside the medieval walls. After its partial destruction during the ‘Repubblica Aurea’ (1447-50), it was rebuilt by Francesco Sforza as his residence. The castle continued to undergo refurbishment and extension work at every change of regime – firstly under Ludovico il Moro until 1499 and then, later, under Spanish dominion halfway through the 16th century, through to the French in the 19th century. Today, the appearance of the castle is the result of the most important renovation work – that of Luca Beltrami, between the 19th and 20th centuries, which reinvented the fortress with significant additions and changes. 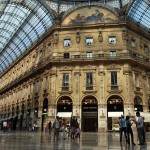 The Gallery has been defined as the ‘Drawing-room of Milan’ and connects Piazza del Duomo with Piazza della Scala. It was created by G. Mengoni between 1865 and 1877 in the shape of a cross with a central octagon and glass and iron covering. It is the traditional meeting place for the Milanese and is considered one of the most important architectural creations of 19th century Milan. 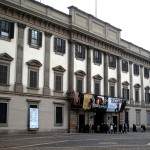 The splendid building that is the Palazzo Reale, the ancient palace of the rulers of Milan, is located right in the heart of the city, next to the Duomo. Its ancient history, elegant architecture and central location make it particularly suitable for staging temporary exhibitions of great interest, organized in its prestigious frescoed and stuccoed halls. Palazzo Reale is a a cultural center in the heart of the city, coordinated with three other exhibition centers: the Rotonda della Besana, Palazzo della Regione and Palazzo dell’Arengario. 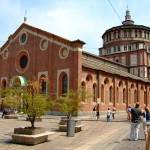 One of the most beautiful churches of the Renaissance period: built between 1466 and 1490 in in Gothic-Lombard architecture by G. Solari and later modified by Bramante, who designed the apse, shaped in the form of a large cube with three angles, and the polygonal lantern gallery. The interior, with three naves, owes its charm to the Renaissance gallery by Bramante, surmounted by a white cupola formed by four grand arches and embellished with decorative engravings. The gallery leads to the chapel, also by Bramante, surrounded by a portico. 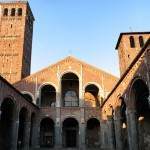 Founded in 379 by Saint Ambrose himself, protector of Milan, as the "Basilica Martyrum" (Basilica of the martyrs), since it housed the remains of Saints Gervasio and Protasio. The Bishop himself was buried there after his death, on Easter Day in the year 397 AD. The original church was repeatedly renovated over the centuries, modifying its initial austere appearance with three naves, as a new presbytery and new apse followed the construction of a second bell tower by the tenth century. In 1126, a collapse of the building obliged large scale interventions and adaptations that continued on in later centuries, until the nineteenth century "restoration" work which, in an attempt to bring back the church's appearance before the collapse of 1196, ultimately had a significant effect on the Basilica's final representation.

Go to the full listing »