24 May Milan for science lovers

Posted at 15:56h in Milan for lovers by Luca Naj-Oleari 0 Comments
0 Likes

Our city has several souls: it’s up to the visitors to choose one of them according to their own interests and passions. Today we will let you discover Milan for science lovers!

The Museum of Science and Technology Leonardo Da Vinci has its seat in via S. Vittore 21, within the ancient monastery of San Vittore al Corpo which was built at the beginning of the 16th century near Piazza Sant’Ambrogio.

It was founded in 1953 and it is one of the most important technical-scientific museums in the world. It contains 15 thousands goods that belong to the world of science, technology and Italian industry from the 19th century onward: clocks, the first TVs and radios, musical instruments, devices to study stars and planets, wagons, bikes, cars and much more.

The most famous room is for sure the Gallery of Leonardo da Vinci, which contains 30 machines for military and civic use built after Leonardo’s projects. The museum also contains the famous submarine of Enrico Toti and the Ebe vessel, one of the biggest sailing ship in the world conserved in a museum. The arrival of the submarine in Milan was very troubled: on 5 August 2001 it set off from Augusta harbour, crossed the Adriatic Sea and then the river Po up to the river harbour of Cremona, where it remained till 8 August 2005, when it started its journey to the museum. 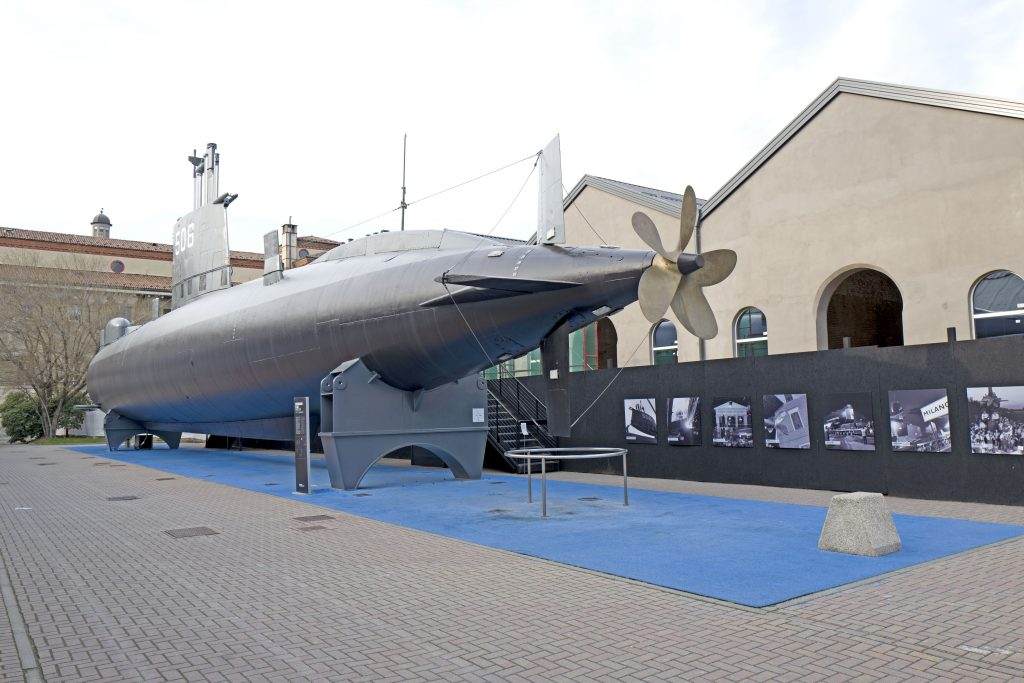 Even the transport from Cremona to Milan wasn’t easy: the travel lasted four nights and it was very expensive. Moreover, they feared that the streets couldn’t carry its 458 tons. Almost three thousands people were in charge of the transport: the Fagioli, a transport company, supplied the technicians and the huge vehicle to carry the submarine. The Municipality of Milan, the ATM (Milanese transportation company) and other service companies worked together to move street lights and traffic lights, but also to dismantle sidewalks and even a roundabout. The Tangenziale, a very congested street that turns around Milan, was closed to allow the submarine to cross the last part of its way in the wrong direction. When it arrived in Milan, thousands of citizens rushed in the streets to see their new submarine.

The museum isn’t just oriented to the past: numerous and innovative are the labs and the events organized in the structure. You can check the complete list on the museum website.

The civic Museum of Natural History is the biggest natural history museum in Italy and you can find it within the Porta Venezia Public Gardens, in a neo-Gothic building of the end of the 20th century.

Inside there are 23 rooms dedicated to mineralogy, botany, vertebrates and invertebrates zoology, to the natural history of humans and to paleontology.

In the paleontology section, the room number 7 is entirely dedicated to dinosaurs: here you will find a terrific reconstruction of the Triceratops, which has become a symbol of the museum, and a skeleton of a Tyrannosaurus rex.

We suggest you to give a look at the exhibition “Volcanoes”, which is showed in the Museum till September 11: spectacular pictures, videos, computer reconstructions, holograms, augmented reality, dioramas, together with an extraordinary collection of volcanic rocks, in order to discover the origins, evolution and secrets of the volcanoes.

A few steps from the Museum of Natural History you can find the Planetarium, a didactical-museum building. Inside it a planetarium projects the image of the stars and their movements in the sky within the cupola.

Within Palazzo Brera the Astronomical Museum hosts the precious astronomical instruments which were owned by the Brera Astronomical Observatory, the oldest scientific research institute in the city. The Cupola on the roofs of Palazzo Brera is part of the Museum: inside you will find the functioning Merz telescope of 1862, with which the astronomer Giovanni Virgilio Schiaparelli discovered the channels of Mars.