03 Aug The fountains in Milan

Posted at 10:33h in Milan for lovers by Luca Naj-Oleari 0 Comments
0 Likes

Italy is famous for its culture and history all over the world. Compared to most Italian cities, Milan seems to have lost in time one of the most common historical aspects in our country: fountains.

Just think, for example, of Rome, another major city in Italy: how many fountains can be encountered while walking around the city? Or think of Viterbo, famous for its 100 fountains. But in reality, Milan has its fountains as well, more or less historical, and often hidden, let's see them together!

The first, and perhaps the most popular one, due to its location, it's the fountain in Piazza Castello. Built in the 30s and then "disassembled" in the 60s for the excavation of the M1 underground, it was later restored and put back in place in March 2000. 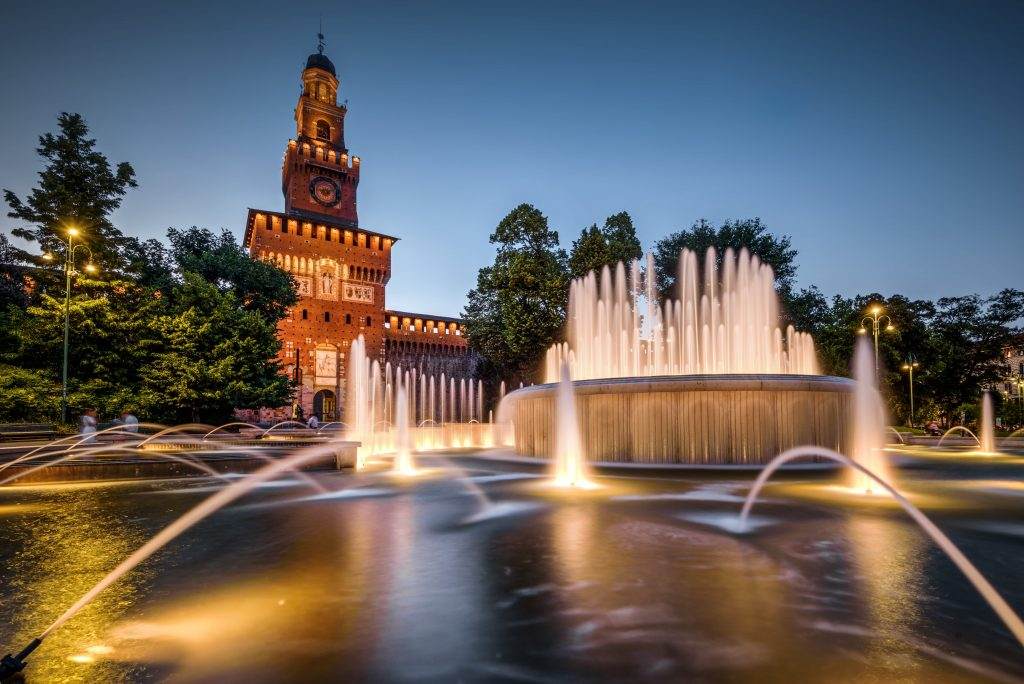 Not far away, in Piazza Cadorna we can find the second and equally famous fountain with "needle and multicolored-thread". Designed by the Swedish couple Claes Oldenburg and Coosje van Bruggen, it was inaugurated in 2000 during the renovation of the railway station of Cadorna.

The meaning of this sculpture lies in two different symbols: the first sees the thread as a representation of the main 3 subway lines (red, yellow and green-colored), while the latter expresses through a needle and thread a tribute to Milanese fashion.

In Sempione Park you will find a very special fountain called "the mysterious baths": it is, in fact, an installation created in 1973 by Giulio Macchi on the design by Giorgio De Chirico during the XV Triennale of Milan.

The work represents a large tank with a curved shape and a painterly texture that simulates the pace of the waves: it contains eight elements of maritime theme, including a colorful swan, a cabin and a trampoline.

In the same area, near the arena in Sempione Park, you'll find what the Milanese people have dubbed as “Fontana of Rotten Water” built between 1925 and 1928. Its funny name comes from the fact that the water that once came out was sulphuric and, despite the acrid smell, it had beneficial effects on health.

The largest fountain in Milan is called "The Four Seasons" for the four Vicenza statues on its sides. It is located in the center of Piazza Giulio Cesare in CityLife district. It was built in 1927 by the architect Renzo Gerla who designed it full of water jets around the central water jet and decorated with statues and pine cones around the perimeter.

The first public fountain in Milan, in neoclassical style, was designed by Giuseppe Piermarini, who inaugurated it in 1782. It's situated in the square of the same name, a short walk from the Duomo.

Its structure is formed by three overlapping tanks made of pink granite. Under the biggest part there are two Carrara marble statues by Giuseppe Franchi, symbolizing two mermaids crouched on dolphins. The external sides of the tank are adorned with four masks.

On the back of the Church of Santa Maria delle Grazie there is the "cloister of the frogs", named in that way because of the circular fountain located in the center and decorated with four bronze frogs placed on its edge.

The square cloister dates back to the late Fifteenth Century and is attributed to Bramante, who at that time was in charge of the engineering project of the church stand.